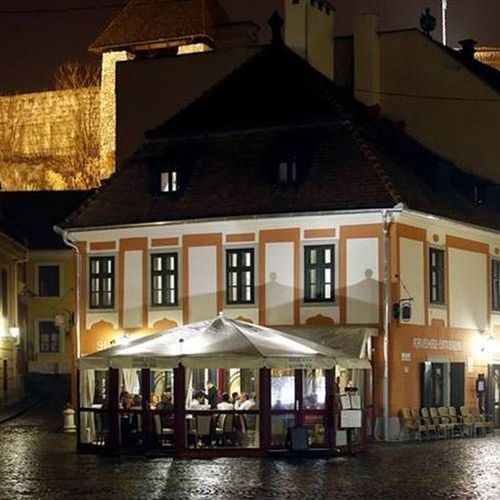 1/34 photo
Facebook Messenger Copy
The price has been calculated by the best price of the next 90 days.

At Dobó square you will find Hotel Senator-Ház, one of Eger’s most prominent hotels built right below the walls of the famous Eger Castle that earned its name during the times of the Turkish invasion of Hungary. This 3 star hotel was built from the actual stones of the castle’s outside wall lending a 300 year old ambiance to the building.

With its 11 rooms, a restaurant, a café, a sauna, a patio that seats 80 people in the summer, it provides a historical atmosphere that is worth visiting for. From the turkish era this building is one of the few that remains to offer a friendly and peaceful atmosphere.

The Café provides a source for both relaxation and entertainment. If you are on a business trip you can organize your meetings and press conferences here.

The Hotel also contributes to the cultural success of Eger, the city which is known as the 3rd most visited tourist destination of Hungary. In Eger the Hotel Senator-Ház became the focal point of the city’s musical and artistic life.

On the patio you can take pleasure in the musical productions, concerts, open-air theatrical performances organized each and every night from early spring till late fall. Molnár C. Pál, Nagy Ernő and many others have been introduced through more than 50 exhibitions sponsored by the Hotel Senator-Ház in the last 15 years.

The Symphonic Orchestra of Eger earned its name here by taking part in one of the most notable musical performances, which is organized every summer for the last 15 years: the Strauss Nights.

The rating of Hotel Senator-Ház Eger is 9.6 from the maximum of 10, based on 432 real guest reviews.

Rating 9.3
"The room heats up in summer easely, airco was of poor design and capacity."
"Nice location, extremely authentic and original interiour, location and design!"
Useful
Individual traveller
based on 2 days
5 months ago
Amersfoort
Rating 9.3
"Friendliness and helpfulness of owner"
Useful
Individual traveller
based on 2 days
10 years ago
Cape Town
Rating 8
"Lovely hotel,great location in absolutely centre of lively atmosphere,nice cozy city boutique hotel with character.restaurant serve a good,decent food,but not the best in Eger,also restaurant service requires a bit improvement,closing early before 11 pm."
Useful
Family with older children
based on 4 days
11 years ago
England
1/144

Based on the reviews and comments of actual guests, the services of the Hotel Senator-Ház Eger have received a high rating of 9.7/10.