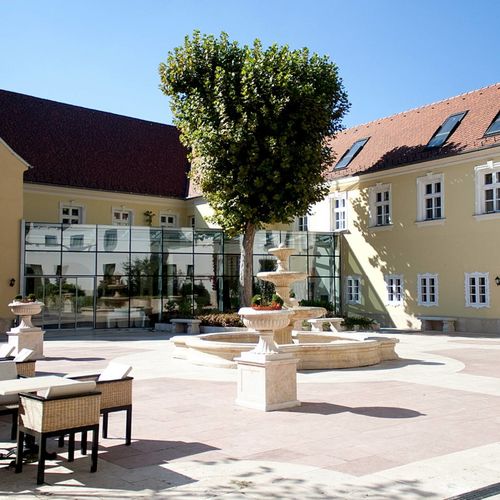 1/59 photo
Facebook Messenger Copy
Please indicate your chosen period to be able to see the exact prices and available room types!
The price has been calculated by the best price of the next 90 days.
With breakfast With breakfast

Kristály Imperial Hotel **** has been built by the design of Jakab Fellner between 1766 and 1769 commissioned by the Esterházy family. The leisure place, that originally was called Szarka Fogadó (Magpie Inn), then Esterházy Hotel, was one of the rest-houses of the Wien?Budapest route. Its first known mention in literature belongs to Ferenc Kazincy, who encountered a carriage accident in 1803 ? in route from Buda to Wien ? and had to spend eight days in the inn out of necessity. His experiences are commemorated in his work titled ?Pályám emlékezete? (Memoires of my career).
Many famous people visited our hotel throughout the ages, such as: Blanka Teleky, Lujza Blaha, Mór Jókai, Károly Kisfaludy, Mihály Vörösmarty, Mór Percel, Árpád Festy, archduke Franz Ferdinand, Jenő Heltai, Pál Jávor, Gyula Csortos, Margit Dajka, Gyula Kabos and Ottó Habsburg. Artúr Görgey, Commander in Chief during the Hungarian revolution and freedom fight of 1848-1849, went to the siege of Buda from his headquarters set up in the hotel.

The hotel lived through many ages, fames and low points, but has always been a popular location of local public life; the majority of balls, theatre plays, club- and party-meetings of Tata were held here.

Híres Vendégeink
As a result of the HUF 187.5 million received from the allocation of the Regional Operative Programme of the National Development Plan I, at the end of January, 2007, the rooms of the two historical wings could be renovated with a unique interior design.

After the public utility lines that run below the Esterházy Wing, which is closest to the main street, were passed, and the original baroque arches were removed, the guest area grew, and a new, authentic place has been created for the highly popular wine tastings.

The elegant reception area, fitting the four-star standards we were aiming at, with the lobby that has been extended and opened with huge glass surfaces showing the inner garden of the building complex was part of this project, and serves as a place for temporary exhibitions from the works of local and country-famous artists since then.

In the next development phase, the wellness area, the extension of the underground car park and a baroque resting garden were created, which made the atmosphere of the lobby even more unique with its sight.

We offer a collection of standard and superior rooms to suit your needs. All of our rooms evoke a feeling of convenience, combined with classic design.

All of our 60 rooms feature comfortable queen size, double or twin size beds and shower or bathroom.

’József’ Wing
It was renovated in 2007 and 9 three stars standard rooms provide accommodation for the guests. Three of them are single rooms with king size bed and one is for physically challenged guests. A single and a double room is connectable for families.

’Erzsébet’ Wing
This is the new part of the Hotel with 37 standard rooms, 2 superior apartments with balcony and a standard double room for physically challenged guests.

Please indicate your chosen period to be able to see the exact prices and available room types!

The rating of Kristály Imperial Hotel Tata is 9.4 from the maximum of 10, based on 524 real guest reviews.

Based on the reviews and comments of actual guests, the services of the Kristály Imperial Hotel Tata have received a high rating of 9.4/10.

Check-in
15:00 - 23:00
In case you can only arrive later than the general check-in time, please inform the accommodation!
Check out
until 11:00
Spoken languages
English, Hungarian, German
Accepted currency
HUF (Ft)
Accepted payment methods
Debit/Credit card, Bank transfer, Cash
Accepted card types
Local tax
The price does not include, but must be paid over the age of 18, 500 Ft / person / night (1.21 € / person / night)
Reception
24 hour
Wellness services
08:00 - 12:00 and 14:00 - 22:00
The guests of the hotel can use the wellness / spa section free of charge.